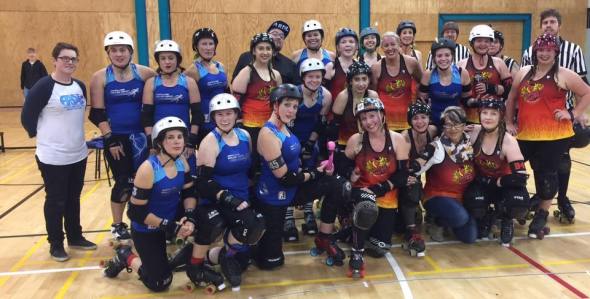 NORTHLAND GET ROLLED BY AUCKLAND

Story from the Northern Advocate.

They might have played their strongest defence of the season but for Northland’s premier roller derby league, Northland Nightmares, it just wasn’t enough to win against Auckland Roller Derby League on Saturday.

The senior Northland team, Hell’s Wives, played one of their most physical battles of the season at ASB Stadium against the strong Auckland team but lost 267-40.

The game was the first pool game in the NZ Top 10 Derby Championships and Northland will have more than two months to perfect their game as they face remaining pool teams in away games to Christchurch on September 30, Palmerston North on October 21 and Rotorua on October 28.

Team captain and coach Wendy Baird said that while the Northland team struggled to get enough points on the board on Saturday, the northern defence did slow down the Auckland jammers from clocking up higher numbers, which was a sign of a strong improvement.

“We were working a new defence strategy, and while we didn’t win this game, we are pretty pleased at how strong our defence was. With a little tweaking, our game will only get stronger now.”

ARDL had just returned from Hawaii where they took home five clear wins in a row, with one a record win for the Aucklanders at 519-22.

The Auckland team, which boasts jammers (point scorers) and blockers such as Team NZ skaters Ellen Mackenzie and Ren Myers, are capable of clocking more points on the board but the strong Northland defence certainly capped it at 267.

“Our jammers played all on their own on Saturday too – our new strategy involves a more concentrated defence wall with flexible, but less, offence,” Baird said.

“This was certainly a new challenge for our jammers, who all have strength, agility and speed but just failed to get through incredibly strong defensive four-walls by Auckland.

“It was an excellent display of derby talent on both sides, though, and a game that the spectators will remember for some time yet.”

The team also rolled out on Saturday in their new, flame-emblazoned Hot Printz uniforms.

The club is now enrolling for its upcoming new skater intake and calling on women interested in playing the sport to get in touch, as well as referees and off-skate volunteers.

Get in touch at rollergirls@clear.net.nz.

Morena loyal supporters and fans!
Roll on over to McKay stadium on August the 21st to support your local roller derby league as they take on Hamilton #rollerderby #rollerskates #NorthlandvsHamilton